Warning: "continue" targeting switch is equivalent to "break". Did you mean to use "continue 2"? in /home/shared-life/www/heartmates/wp-content/plugins/jetpack/_inc/lib/class.media-summary.php on line 77

Warning: "continue" targeting switch is equivalent to "break". Did you mean to use "continue 2"? in /home/shared-life/www/heartmates/wp-content/plugins/jetpack/_inc/lib/class.media-summary.php on line 87

Today marks the first time in a long time Daiki is able to leave the hospital. Although it was a test to see if we (as a team) were capable of getting around safely it was a great feeling. We had to be accompanied by a co-coordinator who’s job it was to asses and guide us on safe practice. She did her best to give us some time and space but her presence was bitter sweet. While she reminded us of present dangers she was a welcomed aid/ safety net! We appreciated her hard work. 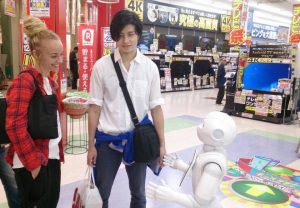 Daiki was like a giddy child at Christmas; eager to get out and feel the breeze and just be ‘normal’ for a day. When was the last time you were excited to walk out your door?

Our trial run took place at a Shopping plaza accessible by monorail. Although Daiki got breathless and tired after 10min of walking and had to sit down, we had a great time perusing the shops and smiling. We even met an astonishingly clever robot who reminded me I was in Japan (it was sooooo smart and was able to answer all Daiki’s questions! Unless it just thought he was a relative gahaha. Too soon for jokes?).

Today we were made aware of some possible hazards. One of the biggest dangers being other people. As Daiki’s Drive Line (the cable inserted into his stomach which connects the Control module to the blood pump attached to his heart) protrudes from under his T-shirt to his battery bag, there is a risk of it being caught on something or someone, which, could have fatal results. Japan is an extremely tightly spaced and densely populated country. While the Japanese are the most polite people I have ever met it seems that all etiquette goes out of the window when it comes to getting on and off transportation. If this cable where to be pulled intentionally or not and disconnected, it would be ‘Sayonara’ Daiki. A knock to anyone who has an LVAD (Left Ventricular Assisted Device- Artificial heart) or even an ICD/ pacemaker implanted could cause discomfort, displacement, pain, bleeding, device malfunction etc.  Children, old people and animals have now become a potential threat. We should also obviously be conscious of umbrellas, polls, posts, doors, etc.
The next biggest fears I have is that Daiki suddenly collapses, there is a power cut or his Heart Mate 11 malfunctions/ batteries run out. These fears will always be there but I believe in time and with experience they will fade as we become accustomed to life with an LVAD.

We cannot let fear stand in the way! It is a deceitful, self created defense mechanism which blocks us from our limitless potential and is as pointless and comfortless as regret. 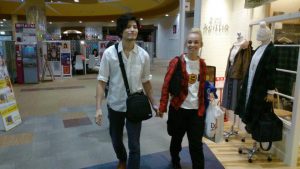 Throughout the day I couldn’t help feel like a little bodyguard or that I was in Hunger Games; on the lookout all the time. I was armed with the 2 spare batteries which we are required to carry with us at all times and ready to kick the school girls out of the ‘Priority seating’ so Daiki could sit down. As a foreign women in Japan though I have to say I have a great ability at commanding space on public transport; even if the reason is because no one wants to sit by me, haha.

Upon returning to the hospital the co-coordinator told us we passed. Yay. The next test will be going out for the day alone. I am constantly worried about Daiki’s condition and feel a lot of responsibility for his well being, but in time it will get easier. I can’t wait to go out on a date again.

I would be interested to hear from other people with LVAD’s in different countries if they have such trials and tests before being able to leave the hospital. Also your experiences going out in public. Thank you.